All Images were done through the AT10RC with the STL-11000M2 Camera. Images are Binned 2×2 The Pleiades, also known as Messier 45 (M45), are among those objects which are known since the earliest times. At least 6 member stars are visible to the naked eye, while under moderate conditions this number increases to 9, and under clear dark skies jumps up to more than a dozen (Vehrenberg, in his Atlas of Deep Sky Splendors, mentions that in 1579, well before the invention of the telescope, astronomer Moestlin has correctly drawn 11 Pleiades stars, while Kepler quotes observations of up to 14).

Next is a redo of M37, again more exposer time but no color on this one
This is 5 x 360 second exposers @ -20c. Stacked and Aligned in MaximDL then touched up In Photoshope CS 4

Although Messier 37 (M37, NGC 2099) is the brightest of the 3 open clusters in southern Auriga, this cluster was missed by Le Gentil when he rediscovered M36 and M38 in 1749, so that it was to Charles Messier to find this one independently on September 2, 1764. Generally unknown until 1984, all three clusters had been previously recorded by Hodierna before 1654.

Finally Here is something new  M33 – “The Triangulum Galaxy”
This is 6 x 180 second exposers @ -20c. Stacked and Aligned in MaximDL then touched up In Photoshope CS 4 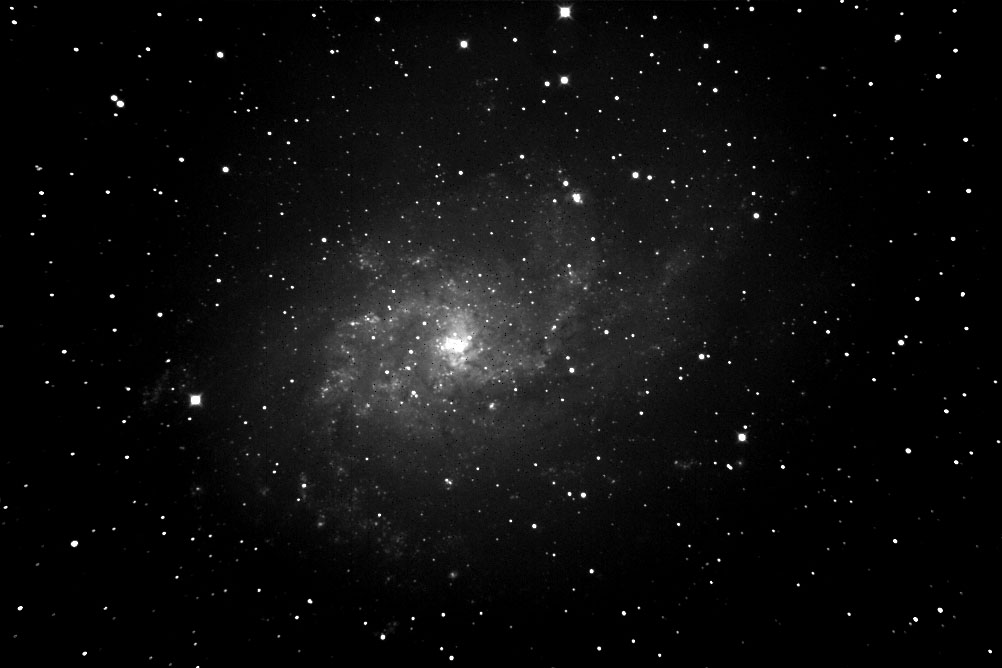 The Triangulum Galaxy Messier 33 (M33, NGC 598) is another prominent member of the Local Group of galaxies. This galaxy is small compared to its big apparent neighbor, the Andromeda galaxy M31, and to our Milky Way galaxy, but by this more of average size for spiral galaxies in the universe. One of the small Local Group member galaxies, LGS 3, is possibly a satellite of M33, which itself may be a remote but gravitationally bound companion of the Andromeda galaxy M31.